The culture shock of becoming suddenly disabled – to any degree – is very difficult to get used to, particularly if you were very active before.

In 2011, Norwich resident Eddie Pleban suffered a life changing stroke on a flight to Australia.  In a medical centre in Dubai, he was given 48 hours to live.

His wife Jeannie was at his side when they gave her the diagnosis. His children flew to Dubai to be with them.

61 year old Eddie was put into a drug induced coma. On day 5 he had a tracheotomy as his family had organised a MEDVAC flight back to Norwich.  He survived the stroke and flew home on day 9.

After eight months in hospital and a year’s physiotherapy, Eddie was discharged.

Eddie was a merchant navy man. He enjoyed climbing, canoeing, wild country camping and skiing, and hoped to regain his former strength, but it hasn’t been possible. He now focuses on helping other stroke survivors and highlighting access issues around the city.

This is Eddie’s story of survival and support.

How did you know you were having a stroke?

I was on a plane returning from seeing family in Australia. It was the middle of the night and I needed the loo. When I stood up, I had a strange feeling and thought it was just jet lag, as I walked back to my seat, I struggled lifting my feet. It was as if I was wearing old fashioned diving boots. I asked Jeannie if my face was OK as I had pins and needles.

A doctor on board told Jeannie I was having a stroke, then my body completely shut down. The rest I don’t remember.

Jeannie is Eddie’s wife. I asked her what happened next…

We were taken to a medical centre in Dubai and there was no response from Eddie at all. That’s when I was told that he had 48 hours to live. I remember texting a friend and just saying “Eddie’s dying in Dubai, please pray.”  People all over the world were praying. My son and daughter came over and on the 5th day, my son said “he’s there, he’s responding”, but the only thing he could move were his eyelids. 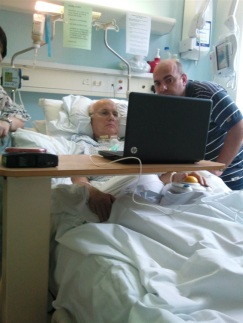 Could you hear what was going on Eddie?

Oh yes. I could hear everything, the medical team were talking about me as if I wasn’t there and all I could do was move my eyelids.

How did you get home?

My family arranged a flight back in a Leer jet with a doctor. It took 14 hours. My wife was told it was unlikely I’d survive the journey.

You did survive, and recover! What was that journey like?

The medical team at the Norfolk and Norwich said I would never walk again and it was unlikely that I would talk again.

I was determined to improve and in 2012 I was an Olympic torch bearer at Sandringham. I managed to walk 28 steps with my torch. In 2013 on my birthday I climbed Mam Torr in Derbyshire from half way up, it took me 3 hours to do a trip that would have taken me 20 minutes each way before my stroke.

How do you help other stroke survivors?

I am the voluntary coordinator in Norwich for a charity called ‘Different Strokes’.  We meet up to talk and the aim is to have fun. We have trips out and a Christmas meal each year together.  I didn’t want it to be an exercise class – we’ve done enough of that in rehabilitation and physio. I want people to come for fun, have a chat and feel normal.

What does the charity do?

Different Strokes is a network of peer support groups with the aim of helping younger stroke survivors to feel more confident about life and less isolated after having a stroke.  The culture shock of becoming suddenly disabled – to any degree – is very difficult to get used to, particularly if you were very active before.

What are the stroke statistics in the UK?

100,000 people have a stroke each year in the UK. 25% of those are of working age, this includes hundreds of children. Our youngest member of the Norwich group is 17 years old.

What’s next for the Norwich group of Different Strokes?

I have an idea to set up an arts and crafts session. This happens in other groups and it encourages people who may have had a skill before their stroke to continue using it if they can.  You can get specially adapted gadgets to help with crochet for example. I just need a keen arts and craft person to help lead it!

You are also a spokesperson for stroke survivors – can you tell me more about that?

I talk to GPs, nursing students and physiotherapists about what it’s like to have a stroke and survive it. I take part in nursing training and speak at conferences. It’s mainly about communication – how they treat you across the bed when you can’t respond in the normal way.

What is your main piece of advice to other stroke survivors?

I was asked once if I set my own goals. Someone responded that you shouldn’t expect to achieve goals so don’t set them. I would disagree.

You’ve got to set goals which may not be achievable, if you can’t do it – don’t worry. Get on with the next, at least you tried. We mourn the things that we’ve lost, but celebrate what we have. 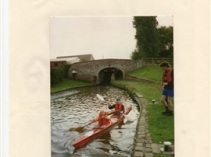 (Images: Eddie’s own. Before his stroke.)

How would you encourage others? (Words of acceptance taken from Eddie’s personal blog)

There is a new world out there to discover. I can’t drive any more and my walking is very poor. But over the past few years I have climbed a mountain, carried the Olympic torch, flown back to Australia, traveled independently in my Power chair and visited many places in the UK on my own.

Life doesn’t need to be just an existence, it’s an exploration. There are so many things out there that can give you something to live for and enjoy.

Try not to allow yourself to get stuck in that “I’ll never be able to do that again” mode, it isn’t an easy journey, but the world is your oyster, so get out there and explore it.

Thankyou to Eddie and Jeannie for sharing their story with me.

To follow Eddie’s story, his blog can be found at:http://www.bantameddie.com

For more information about the charity Different Strokes: https://differentstrokes.co.uk

This site uses Akismet to reduce spam. Learn how your comment data is processed.

My name is Liz and I am a writer, communications specialist, broadcast journalist and blogger, mum of 3 and currently working from home.

Afinepeople is a collection of human interest stories about people whose passion, work or hobbies benefit others.  It’s about people with a purpose, based in and around the city of Norwich.

I hope you enjoy reading it.